This website started in April 2013. It contains information and TT news that impacts the County of Sussex and also seeks to promotes TT within the County. The County Objectives are all detailed in the SCTTA Annual County Plan which can be found below along with information about SCTTA. There are also many County Reference Documents now on this website. Please send TT news items of interest within Sussex County to the email address below. The Website has recently been upgraded  to latest software versions and more recently to enable Video's.

This event has not been run since September 2019 and it has now been planned for this coming 4th September at the Triangle Leisure Centre starting at 9 am for Cadets/Juniors (Boys/Girls) and Seniors (Men/Women) starting at 11 am. The Event looks at bringing together the best players in the respective age categories.

Invitations have been sent out and it hoped that all if not most of those invited can make the date in respect of 8 players for the Men/Boys and 4 players for Women/Girls on the 4th September. The event is set to be confirmed on Monday 29th August dependent on responses of invited players.

Please come along on the Sunday morning to see the best in the County playing.

Following the County AGM on the 11th July there are additions to the Management Committee with Sally Hughes as Vice Chairman and championing Women and Girls - see earlier News Item - and Amanda Worne championing Access and Disability issues. The full list is on the Contacts Page with a link to contact details and included here for ease of reference. The County is still looking for Volunteers for Secretary, Treasurer and Development Officers roles and if you can spare some hours each week then please let me know on This email address is being protected from spambots. You need JavaScript enabled to view it., or your local County League Representative.

The County List of Vice Presidents and Life Members has been updated to include Andrew Hayes, who has been East Grinstead League Chairman for many years and was awarded Life Membership of the County at the recent County AGM. The full list can be seen here.

Please see below information about Events taking place in the County of Sussex this coming season.

The County has been putting them together over the last month for the coming Season as per the County Plan as follows:

In addition there are the following events planned by Rory Scott as follows:

The following event has also been planned by James Pettigrew as follows:

These can also be seen on the spreadsheet on the following link which also contains information about dates for other nearby events such as British League and London Academy.

Entry Forms will be posted as they become available on the TTE Website where appropriate or News Items here for such events as the Novice Cadet Events.

At the County AGM there was a discussion on how to develop young players in Sussex other than within Club and County Coaching environments. A proposal was presented for the running of a number of "Novice" Tournament closed to Sussex and in bands. It was the view that this would require less resource than the previously suggested County U11/U13 Competition and would enable Cadets to play others with similar ability. The suggestion made that a definition of a "Beginner" or "Novice" being to ability to hold rallies, awareness of the rules and can serve. Please see a copy of the paper presented "Developing Young Players in Sussex" and it was recognised that they would be of minimal charge with entry fees enabling break-even. The dates provisionally agreed were the 8th October (Triangle Leisure Centre) 19th November (South West Sussex), 21st January (Hastings) and 18th February (Triangle Leisure Centre). At the moment of writing it is possible that the 8th October may change to the 15th October.

This was held on the same day (morning) as the TTE AGM (afternoon) and it reviewed the year. It can be found here for ease of reference - Annual Review.

If you feel like watching the presentation of the Review completely, along with the Awards made then you can watch the whole 2.5 hours on a video on the following link:

This event was held at the Triangle Leisure Centre, Burgess Hill on the 7th August and although only a 1 Star Event it attracted a very strong list of high-ranking players. Perhaps the prize money on offer had something to do with it - £500 for the winner, £250 for Runner Up and £100 losing semi-finalists. Even the Consolation Event had prize money with the winner receiving £100 and Runner Up £50. The format was groups of 4 in the Open with further groups of 4 before the main draws. It was a Mixed Open Singles only with the sponsorship from eBatt and Global University Systems and the winner was Grigory Vlasov with the Runner Up Chris Doran. Report and videos of the some of the key matches can be found on the following link along with the results of the groups and main/consolation draws:

Another cracking read in the latest edition of the TT Times Issue Number 27 produced by Diane and Harvey Webb. This Summer Edition is packed full of stories and reports for everything that is happening in the Table Tennis World. In this edition:

For those who are not affiliated to Table Tennis England you will not have seen these Newsletter. However, if you are thinking of doing so even if you are only playing socially, the there is much information of interest around Table Tennis. Below is a summary of recent Newsletter and the topics included and the links to TTE Website are still active by using Ctrl-Click:

During last season following the return to play in April 2021, 16 County Coaching Sessions have been held organised by Maureen Hazell. It was difficult to restart following Covid-19 but the regular sessions were able to identify the emerging talent within the County and the creation, for both Cadets and Juniors, Performance and Development Squads. The players selected can be seen on the following links and note that the names are in alphabetical order and not ranking.

These players will receive further County Coaching during the 2022/2023 Season and also be available for selection for County Championship Matches.

Note that there may be some changes with respect to timing/venue for the 1st October and 19th November dates due to a Volleyball Women's Cup Competition in the sports hall at the same time for part of the session at the moment.

The Sussex County AGM was held on the 11th July at the Lewes Town Hall and the passing of recent County Life Members and Vice Presidents were remembered at the very start. It was the first physical meeting for sometime.

Reports were presented and in summary the following were the main points from the meeting:

It was an excellent meeting with lots of enthusiasm. Note that the County still need a Secretary and Treasurer and so if you feel you can contribute then please do not hesitate to contact me. There are further news items on some of the topics mentioned.

The last Horsham Spinners Senior/Veteran 1 Star event of the 2021/2022 Season organised by Brett Holt (on behalf of Rory Scott), took place at the Six Villages Sports Hall on the 10th July. Besides the Senior and Veteran separate events there was an Open combining the categories. All the results from the event can be found on the following link.

The last Horsham Spinners Cadet/Junior 1 Star event of the 2021/2022 Season organised by Brett Holt (on behalf of Rory Scott), took place at the Six Villages Sports Hall on the 9th July. The age categories were U12, U13, U14, U15, U18, and U19. All the results from the event can be found on the following link. 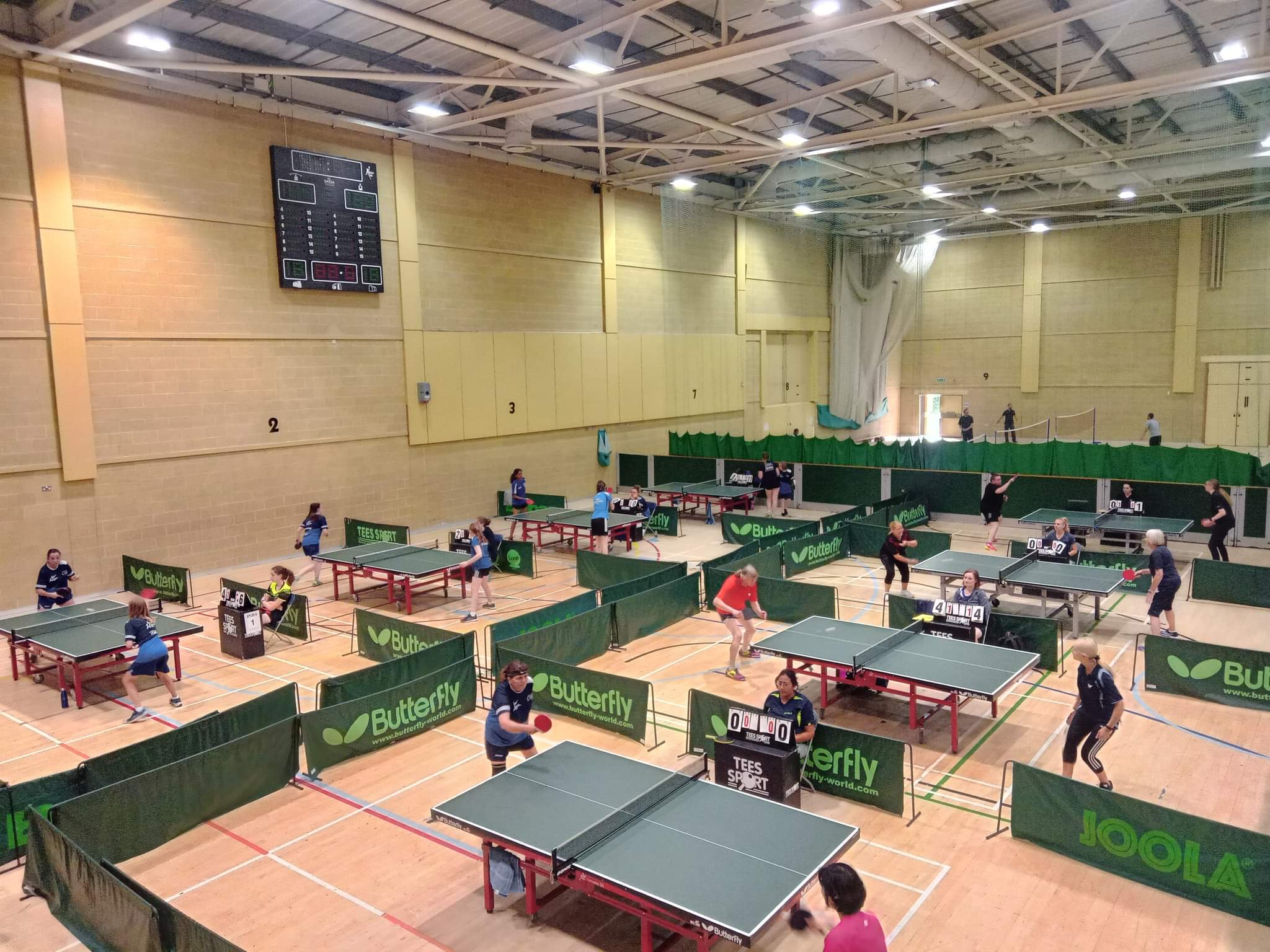 Thanks to the hard work of Sally Hughes in obtaining funding from TTE and much communication and energy she has achieved in creating the very first Women and Girls 1 Star Tournament to be approved by TTE. It was held at the Triangle Leisure Centre on the 2nd July and there were 6 events - Under 21, Over 21 and Open with consolation events for each. There was a good standard with some 30 plus players and it was held under the County Banner with funds ring-fenced. Sussex Players were well represented and Jodie Morris from Sussex won the Under 21 Event. Ewelina Sychta won both the Over 21 and Open. There was also a Sportswomen Award for Karin Kunrath.

All the information in respect of results for all the group matches and main draws can be found on the following link and note by clicking on an image you will get all the relevant groups, etc.:

Another Event is scheduled for the 5th November again at the Triangle Leisure Centre, and please see the Entry Form . It is planned that Over 21/Over 21 Events are held am with an Open for all ages pm. Entry Fee is £10 for am events and £10 for pm event. Consolation Events planned subject to no scheduling issues on the day. Sally Hughes can be contacted with the number on the entry form for any queries.

All the News Items from this Page for the period March 2022 to June 2022 have been archived and can be found on the Archive Page. For ease of reference, it can be found as follows:

For information News Items are generally on the relevant Page and duplicated on this main feed. Archived Files therefore capture all the news items made from when the site started in 2013 and can be used for Reference.

The SCTTA is affiliated to the Table Tennis England (TTE) and represents 9 leagues within Sussex with 969 (of which 72 were Junior) affiliated league playing members in the 2019/2020 Season. The SCTTA is a non profit making organisation and through affiliation fees paid by Players in the Sussex Leagues supports a number of County Teams at Cadet, Junior, Senior and Veteran level. Last Season 12 Teams were entered in the various categories with the Senior Team winning the Premier Division. The County also runs events each year such as Sussex Closed, Invitation Event (top 8 in various categories), and in the recent past have run regular Coaching Sessions and 2* Events.

The County Management Committee are all Volunteers and meet around 6 times a year along with an AGM. If you wish to assist and Volunteer then please contact me as below.

In the context of the need recognised for a County Complaints Procedure to be available, the County "Safeguarding Policy & Protection of Vulnerable Adults Policy" and the "Child Safeguarding Policy Statement" were reviewed at the County Meeting on the 25th March, 2019. In the main they were updated to reflect TTE and associated documents and to include reference to County using only Licensed Coaches along with ensuring DBS Checks have been carried out for all relevant County Officers as being aware of Social Media implications.   It should be noted that Leagues and Clubs should have something similar or at least reference to these. These Policies are in addition to the County Constitution and will be referred to by a proposed rules change.