The Haywards heath held their Closed Tournament on Sunday 12th September where Brandon Bennett secured a double winning the Premier and Handicap Titles and Andy Walker won the Veteran Title. Please see Report on the event prepared by Brett Holt.

The Haywards Heath League are holding their annual Closed Event on Sunday 12th September at Warden Park School. Please find the Entry Form with entreis closing on the 5th September. Practice for the new season start on Wednesday 15th September.

The Haywards Heath League are holding their AGM on Thursday 5th August at the Rawson Hall, Bolney starting at 7.30 pm. The Committee is proposing to adopt a new Constitution and a revised set of Rules which recognise that the activities carried out go beyond League Play, to include Coaching and Practice. Please see Agenda

The Haywards Heath League have arranged a Training Camp from the 23rd August to the 27th August from 10am to 4pm at Sackville School, Lewes Road, East Grinstead, West Sussex, RH19 3TY - please see Flyer and - Entry Form;

As from the coming week practice sessions at Haywards Heath venue at Warden Park School resume on Wednesdays and Sunday with pre-booking and pre-payment arrangements in place. Members of the League should have received information about the arrangements and booking. It is hoped that Junior Coaching will also resume at the end of May. The League has decided to abandon the end of their League Season which ran during the month of October before the lockdown in October.

It is sad to report that David Champneys, a stalwart of the Haywards Heath League for many years, unexpectedly passed away. He died in his sleep of an unknown cause with no prior signs of illness. This is devastating news and heart-breaking for his family, as Dave was only in his 50's and was in good health, both mentally and physically. Our thoughts go out to his family. I personally will miss my games with him. 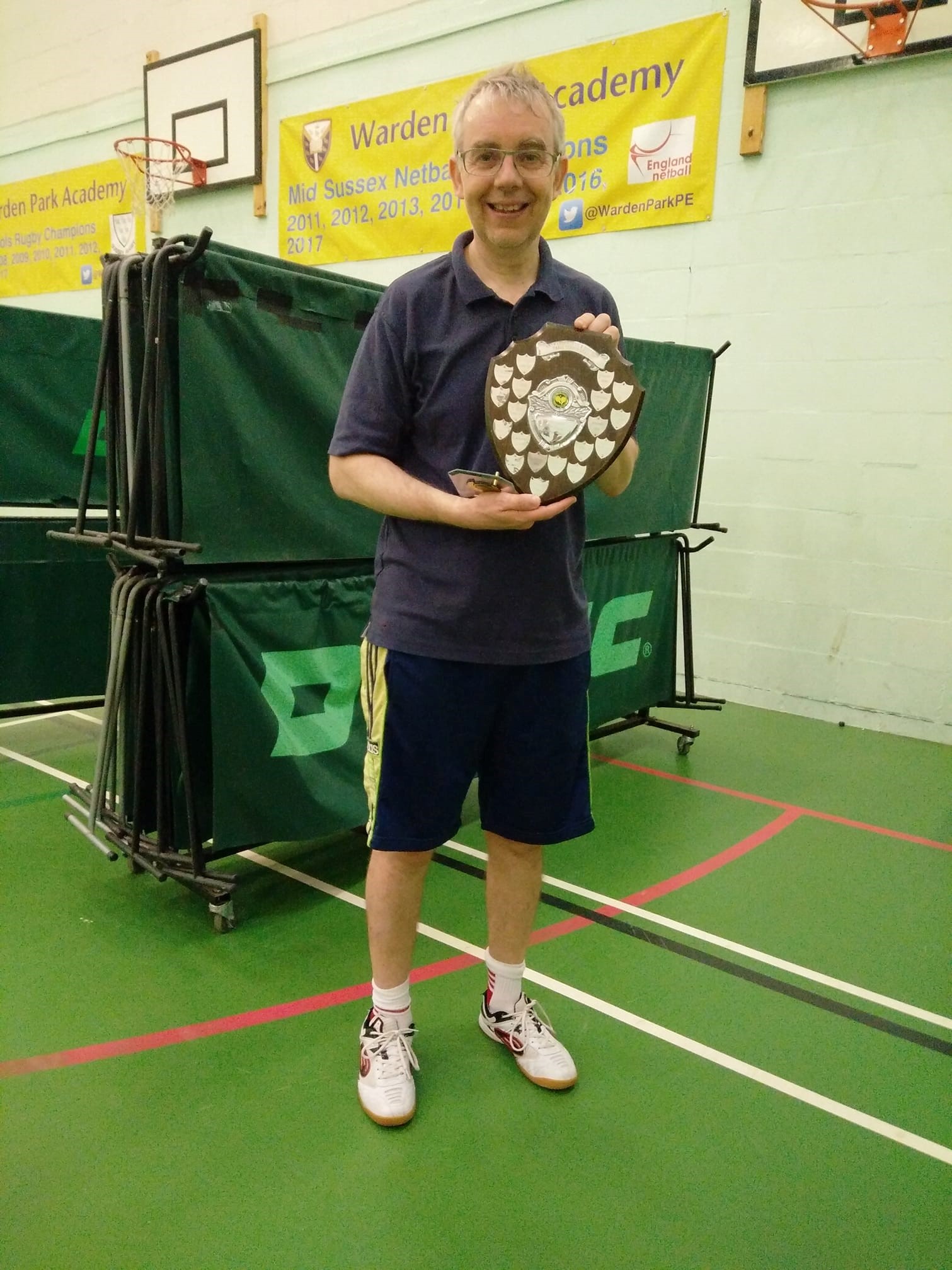 The Haywards Heath League succesfully returned to play starting on Wednesday October 7th at their central venue in the Warden Park School Sports Hall. They negotiated access during August and Practice sessions were held during September, and so congratulations to the Haywards Heath League. Please see a copy of this year's Handbook which contains Code of Conduct and Principles of the return to play. Subsequent to the publication of the Handbook all matches have to finish by 10 pm in line with current TTE Guidlines and also Umpires and Players not playing have to wear Masks.

The Haywards Heath are looking to resume Practice and Coaching Sessions at their central venue in Warden Park School in September and for the League Season to start in October. Arrangement for Covid-19 have been put in place and September is planned to be a learning time and Codes of Conduct/Principles of Return have been produced and will be made available to registered players. A copy of the information can be found here.

The Haywards League Committee have agreed to abandon and end the season 2019 to 2020, even though the fixtures remained incomplete. The final positions are as they stand and Trophies and Medals will be issued to the winners and runners-up. Special congratulations to Keigo Burnham who won all his 41 Premier League matches. There is uncertainly over the start date and team make up for the next seasn and the committee have decided that there will not necessarily be automatic promotion and relegation.

The Haywards Heath League plays matches at a central venue in the Sports Hall of Warden Park School in Cuckfield with their equipment stored on the site. The lighting in the Sports Hall has been very poor for some time and a source of concern to players. However, the lights are being upgraded this week which should be a delight to all and I understand that Haywards Heath League has made a significant contribution to the School to enable the purchase and installation.

Please find the Handbook for the coming season containing information on management committee, team captains and fixtures. There are three divisions with 6 in the Premier and 8 in the other two divisions. It is interesting that the League endeavours to create equal teams from the players registered from the League. So you know that matches will be close and that you never quite know who you will be playing with at the start of the season!